Complementary transfer projects transform the doctoral program 'Good Work' into a communication lab. The program wants to contribute to strengthening “Public Science” and therefore includes the exchange of knowledge as an important part of the doctoral program. This public exchange is initially integrated in all dissertation projects and equally important.

There will be two transfer modules to enable this:

(1) Science in Practice. Practical experiences are directly integrated into the research and will be worked on together with corresponding actors.

(2) Transformation and Visualization. This module will be executed in cooperation with the University of Arts Berlin (UdK). Students from the UdK and the doctoral program’s scholarship holders work together in project teams.

The following projects have already been developed:

In cooperation with a team of freelance designers, a variety of infographics were developed, illustrating the change of work in terms of structural change of employment, the challenges of negotiating work and the change of value added chains.

The infographics can either be used in print, online, as posters or fully animated web versions for social media purpose. In the final publications of a Hans Böckler Foundation’s expert committee, the infographics already illustrated the "Future Work“.

In her transfer project, Franziska Kößler assessed psychological risks within the companies that she is also cooperating for her research with. She used questionnaires that are adapted to different occupations, based on the interviews and observations she conducted. She thereby examined stressors and resources the employees face. Those factors might be part of their tasks, the organization of their work or their social relationships at work.

In this project, Esther Kroll (psychology) and Kathleen Warnhoff (sociology) are working in an interdisciplinary team with two designers from UdK (University of the Arts Berlin) – Doreen Baldauf and Sascha (Aleksandra) Bespalova. The mutual goal is display the very complex topic of discrimination in digital human resources applications in a way that also sparks a debate outside of scientific areas.  As first result, an interactive poster was presented at the Long Night of Sciences 2018. The poster's title is "Digitalization through rose colored glasses". Depending on the people wearing either rose or blue colored glasses, they are able to see the hopes respectively concerns that employees expressed when they were asked about the digitalization in their companies.

The aim of this project was to share insights from sociological research with pupils from Berlin high schools. Therefore, seminars on different topics were planned to acquaint pupils with sociological insights that are also of particular relevance to pupils‘ everyday lives. The first seminar focused on persistent gender inequalities on the labor market, while the second seminar discussed the use of statistical and graphical representations in media outlets.

The concept of job-sharing is gaining increased attention again. Is it possible to combine part-time work with career while enhancing the work-life-balance? In a short radio report voices from scientists, practitioners and human relation professionals give their answers to this question.

The work within digital offices has clearly led to a higher working speed. On a nearly daily base, the organization of work is negotiated. What does this mean for workers' participation? How can participation accompany these changes and become an active part of it? Together with practitioners, these questions will be looked into.

Welfare of Resistance: A Photographic Project on Daily Practices of Resistance to Social and Employment Precarity (Giulia Tattarini)

By using pictures, videos and texts, 'Welfare of Resistance' aims to inform a non-academic public about the nature of precariousness in Germany. In particular, the pictures transport the social and economic consequences of the Hartz IV reform for its recipients. Moreover, they tell about ways of coping with precariousness—ways and practices to resist. The written boards (English and German) show the broad context, describing what precariousness is and who the Hartz IV recipients are; the visual part focuses on the ‘Sozialberatung’ in Berlin, their activities, and the people who participate in it. Photos and videos tell stories about individual and collective agency; stories in which solidarity and mutualism become powerful tools to fight insecurity, precarity, and stigma.

Esther Kroll und Kathleen Warnhoff participated in the "Knowledge City Berlin 2021" project with their VR project "Behind Closed Doors", in collaboration with Doreen Baldauf and Aleksandra Bespalova from UdK Berlin.

Breaking the Wall of Discrimination

Video on the ViSoP project by Esther Kroll, Kathleen Warnhoff, Sascha Bespalova and Doreen Baldauf-Uhlmann - nominated in the Falling Walls Conference 2020 and finalist as "Breakthrough of the year" 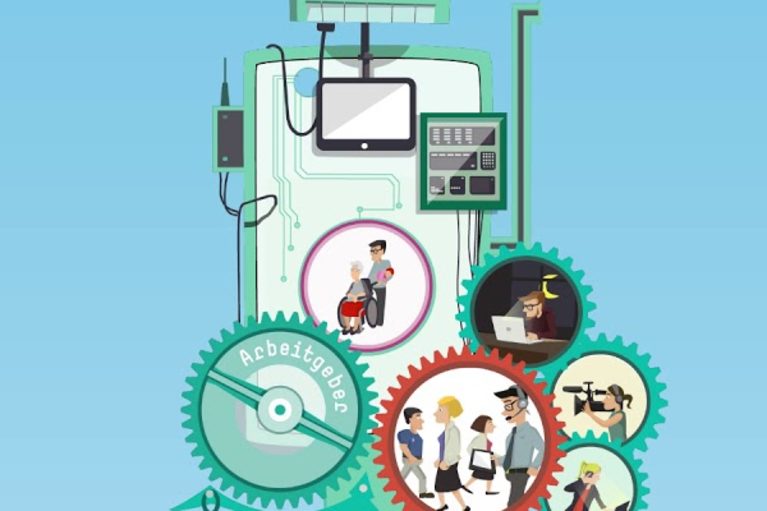 Giulia Tattarini produced a video within her work for the transfer project called "Welfare of Resistance" that portraits people in an initiative supporting persons that our out-of-work.

Hear a radio podcast of Nicolas Morgenroth (in German) that deals with "Die letzten Fossilien - Gewerkschaften in Zeiten des Klimawandels", featured on 01.10.2018 in Deutschlandfunk Kultur.